In this tutorial we will explore the use of finite state machines by looking at an example. The example we will use is a railway crossing. Main focus is this tutorial is to develop the code by using finite state machines as much as possible. In that way the advantages of using them becomes clear. Code can be developed in small parts, has a clear structure and is easy to modify if needed.

A complication in the above process is that at any time in the process another train can be approaching for example in the situation when the gates are open again but the lights are still blinking. When a train is detected in that situation the gates should close again, lights remain blinking and the above process continuous from there so go to step 3.

So we have to elaborate a bit on additional functionality:

Below are clickable images for the schematic and breadboard layout.

We will develop the software for the railway model in several steps as indicated in article Arduino and multitasking.

In short: we will develop a state machine for each type of actuators and for the sensor that deal with all their details, next to a state machine to control the overall functionality. The overall state machine will get input from the sensor (train detected or not), it controls whether the LEDs are blinking or not, but will not implement the details of the actual blinking process. Similarly it will control and get input from the gate (whether the gate is completely opened) but it will not control the actual closing and opening processes of the gate.

All these state machines will be implemented in separate functions that will be called from within the loop() function of the Arduino code. Required initializations will be placed in the setup() function. Most variables are global and initialized when starting the program. 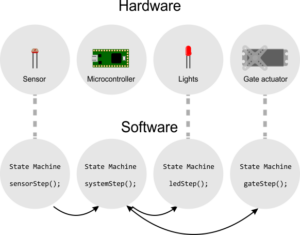 Relation of hardware and state machines in software.

The sensor process will be handled through a function called sensorStep() which will be called from within the loop() function.

Read the sensor value (output voltage from voltage divider). When it reaches a certain threshold value we assume a train is detected and set an appropriate indicator flag called sensorActivated from false to true. Notice that in the given circuit the sensor value increases when the LDR is covered (so it gets a higher resistance).

It is a good practice to test parts of the code independently. A simple testing program for sensorStep() can be downloaded below. It prints the sensorValue and sensorActivated values to the serial port.

We have two types of actuators the LEDs and the servo. We will develop a separate function for the process for each of them called ledStep() and servoStep() respectively.

The led process will be handled by a function ledStep() to be called from within the loop() function.

The LEDs can be off or they can be blinking. When they are blinking, they do that alternating meaning when one LED is on, the other one is off and after some time the second one is on and the first one is off.
For the remainder of the program (the part not handling the led process) it is only important to have control over whether the LEDs are off or whether they are blinking. That implies that changing state from off to blinking or vice versa will be by an external trigger variable. The timing required for the blinking in the blinking state can be done internally from within the ledStep() function.

LEDs state table. As mentioned there are only 2 states. We have to look what needs to happen when entering, when in, and when leaving each state. 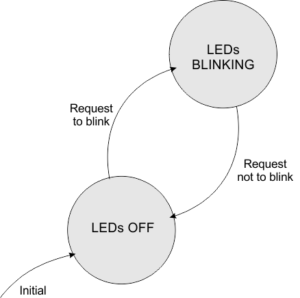 In (pseudo) code (do everytime when changing state):

Detection for entering a state is then done by comparing currentState and previousState. When the values are not the same we enter currentState for the first time. When all actions to be done when entering the state are performed, we set previous state equal to current state so next time we enter the function the code for remaining in the state will be executed.

The alternating on-off pattern for the LEDs is programmed using a variable indicating the status of led1 which is then toggled (in code led1Value = !led1Value) every time the timer expires. Notice the exclamation mark (logical not). Of course the value for led2 is always the opposite of the value for led1 so !led1Value. The timer is implemented using the millis() function (see Arduino and multi-tasking)

Code for definitions, declarations and initializations (beginning of program)

Once more a separate test is good practice. Download an example test program below. This program basically switches blinking on and off based on an additional timer.

Of course the gate should open and close when required by the main logic part of the program. As the servo has only one single speed of opening or closing we also need some control over the (timing of the) opening and closing process. That leads to 4 different states the gate can be in: Open, closing, closed, and opening. Once again for each of these states we will have to look what needs to happen when entering, when in, and when leaving the state. This is summarized in the below table and state transition diagram. 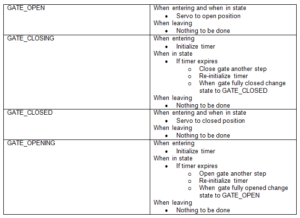 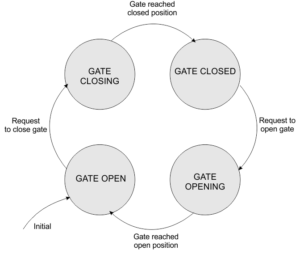 Given the before, the code is quite straightforward. Defining the states and servo positions, defining and initiation of variables for controlling the state (gateState and prevgateState), timing (gateChangingTimer), and servo position (servoPos).
Initialize instance for servo (myServo) and in setup() attach it to a pin and move it to starting position.

The function gateStep() implements the finite state machine described before. An external request is needed to go to the closing or opening state, while the open and closed state are entered through a condition internal in the function. Timing for the steps when opening or closing is done through the millis() function.

Remark: The opening and closing states behavior in the code is dependent on the way the servo is positioned physically (meaning that different code is needed when SERVO_OPENPOS < SERVO_CLOSEPOS). Of course this can be included in the program at the cost of more code and an additional if statement. We decided not to do that to keep the code more readable.

For the testing program we need to consider a few things, he most important one is that closing and opening of the gate requires multiple calls to the gateStep() function as the gate is only opened and closed in small steps. The gateStep() function uses its state variable gateState for indicating whether the gate has fully opened or closed, so we will have to keep calling gateStep() until gateState changes to GATE_OPEN or GATE_CLOSED:

So far we have developed a number of functions that read the input and control the output, mostly by using finite state machines implementations. The final step is to combine all these functions in order to achieve the overall functionality of the railway crossing. The functionality is already described in text in the introduction of this tutorial. Now it is time to implement it, first in an abstract form as a finite state machine. Later as code as well.

From the description we can distinguish a number of system level states:

Once more we make a state table and state transition diagram looking at what needs to happen when entering, when in, and when leaving the state. A complication in this case is that in every state another train can be detected and we need to take appropriate action. 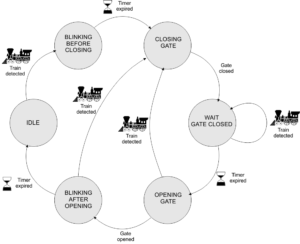 The core functionality described before is programmed in a separate function systemStep() which will be called everytime the code in loop() runs. The below data flow diagram illustrates the communication between all the …step() functions. The systemStep() function controls the main functionality by reading the variables sensorActivated (detect trains) and gateState (check whether the gate has fully opened or closed). systemStep() controls the LEDs through setting ledState and the gate through setting gateState at specific values. 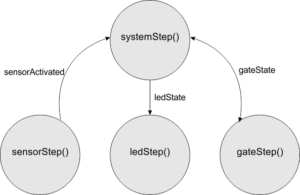 The finites state machine described before is again implemented through a switch statement. Since it uses many parts of code similar to those discussed before, it should be understandable without much explanation.

You may notice some additional code at the end of loop(). This is intended for debugging and will be described in more detail below.

Since the complete code can best be debugged when it is running, it is important to have some debugging information. This is implemented in a function printDebug() that prints the most important variable values (sensorValue and moving average, and state values) in a single line to the serial monitor. Notice the ‘\t’ which in C-code is the TAB character.
printDebug()is switched on/off by defining a pre-processor variable DEBUGINFO. When commented out (so //#define DEBUGINFO) there is no debug info. When not commented out, debug info will be printed. We use conditional compiling. The serial library is only compiled and loaded when needed, which saves program memory.

And finally the printdebug() code which again uses conditional compiling

An additional way of debugging is implemented through the built-in LED. It implements that the LED is on when systemState is even and is off otherwise. In this way it is easy to see ifthe program is running and is switching states.

The complete code can be downloaded below.

The code uses functions without arguments and return values and it uses mostly variables with a global scope. For a small program like the example this is not a problem but for a bigger program it is better to use functions with arguments and returns and minimize the use of global variables a the cost of a bit more complex code.
The code is meant as example to clarify how state machines can help to program interactive systems. It is certainly possible to optimize the code more.