Potmeter is short for potentiometer. A potmeter is a three-terminal resistor with a sliding (slider potmeter) or rotating contact. Depending on the way they are connected, potmeters are used as voltage dividers or as a variable resistance, measured in Ω.

Potmeters can be used to get input from users, to establish pre-set voltage level, or to measure rotations (within the physical limitations of the potmeter). The volume knob in many stereos is a potentiometer, although rotary encoders coupled to digital volume control chips also exist. Most rotary potentiometers have a maximum rotation angel close to 270 degrees.

Potmeters are composed of a resistance material between the two outer legs (A and C in below figure) on top of which a slider can move that is connected to the middle leg (labeled B). By moving the slider the resistance values between A and B and between B and C change however the total resistance between A and C will remain the same of course. 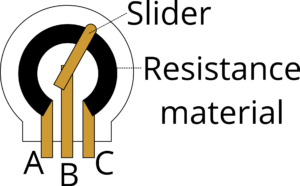 Most uses are as a voltage divider, by connecting the supply voltage to the the outer two legs, and then use the middle leg as variable output voltage (with respect to ground, of course). Warning: as is the case by any voltage divider: a potmeter cannot be used as a power supply with a constant voltage as the output voltage will change depending on the load.

Potmeters can be used as variable resistance by connecting one of the outer legs to the middle leg (for example connecting B and C). In that case the variable value is between leg A and (BC). One could also use only two pins. But in most practical applications all connections from a potmeter are used. Imagine the wiper pin comes loose for a short moment (after some years of service). Then you have a very high resistance (close to infinite) between one of the outer pins and the slider. When the wiper pin is connected with one of the ‘fixed’ ends (A or C in the image above), the resistance can never exceed the total potmeter resistance, e.g. 10 kOhm, but it can get close to 0 Ohm. This is at least some kind of limit.

Potmeters are available with a fixed axle for easy manual setting, or as a small trimmer potmeters to set once and forget afterwards, and as multiple-turn version allowing a more accurate setting.

Get some extra visual input on a potmeter