Voltage dividers are commonly used to create reference voltages for example by means of a potmeter or to reduce the magnitude of the voltage to values acceptable as input for the following circuit or microcontroller.

Another important usage is to translate the resistance value of resistive sensors like LDR, thermistor to a voltage suitable for further usage. In this type of usage one of the two resistors is a sensor (see tutorial on reading analog sensors).

Yet another usage is to provide a DC voltage offset when amplifying small signals using an opamp ( operational amplifier).

A voltage divider cannot be used as constant voltage power supply. Use a voltage regulator instead.

A simple example of a voltage divider is two resistors connected in series, with the input voltage applied across the resistor pair and the output voltage emerging from the connection between them.

The relation between $V_{out}$ and $V_{in}$ can be derived by using Ohm’s law to calculate current $I$ assuming that the current out of the voltage divider can be neglected or $I_{out} << I$:

The voltage difference across  $R_1$ is calculated similarly:

If we compare $V_{R_1}$ and $V_{out}$ we see that they are proportional to the resistor value, hence the name voltage divider. In equation:

Voltage divider and a load

What happens when we apply a load to the voltage divider (use it as power supply or current $I$ too large to assume $I_{out} << I$)? 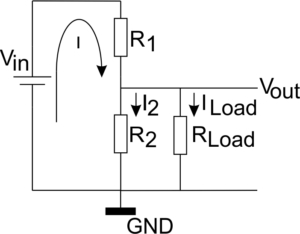 Now the current $I$ splits in a current $I_2$ through $R_2$ and $I_{Load}$ through the load with resistance $R_{Load}$. Usually $R_{Load}$ will not be in the order of kilo ohms, so a big part of the current will flow through the load and also through $R_1$. This has the danger that the power dissipation in $R_1$ exceeds its maximum rating burning out $R_1$. Next to that the output voltage $V_{out}$ will be influenced since $R_2$ of the previous calculation is now replaced by $R_2$ in parallel with $R_{Load}$ which is smaller than $R_2$ resulting in a lower output voltage.

As can be seen the output voltage $V_{out}$ is now depending on the load, which is not what you would expect from a constant voltage power supply.

Given the before: Do not use a voltage divider as a power supply. It is not suited for that!

A common question about voltage dividers is: “What resistor values should be used?” For this two arguments need to be considered: