A photo-transistors is a bipolar semiconductor device that converts light energy into electric current.

Because photo-transistors, like any transistor, amplify the signal, they produce a higher current than photo-diodes. Photo-transistors are quite fast and their output is practically instantaneous. They are relatively inexpensive, simple, and so small that several of them can fit onto a single integrated computer chip.

Packages that incorporate an IR LED and an IR photo-transistor are also available. They can be used as proximity sensor.

Be aware: most photo transistors have two terminals only, not three as you might expect for a transistor. Do not confuse them with photo diodes.

How a Photo-transistor Works 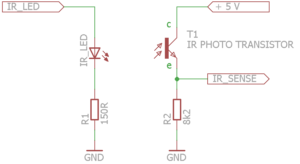