A thermistor short for thermic resistor is a two legged temperature dependent resistor.

There are NTC and PTC variants, with a Negative or Positive Temperature Coefficient respectively.

In an NTC, the resistance decreases with increasing temperature. NTCs are very robust and cheap, therefore they are widely used as temperature sensor. They can measure a wide range of temperatures and are quite sensitive around room temperatures which makes them very useful for example in thermometers and thermostats.

Common characteristics of a NTC are:

In a PTC, the resistance increases with increasing temperature.

The PTC is more commonly known as the poly switch fuse. As the current through this resistor increases, it’s temperature increases. That again increases the resistance (PTC). In the end the increasing resistance limits the current. That lowers the temperature. And the current will get smaller automatically. So we have an automatic fuse, one that we don’t have to reactivate. In practical situations you might choose a PTC based on certain currents it can handle, rather than its resistance. The power supply circuitry of an Arduino Uno and a Raspberry Pi both make use of a PTC or Polyfuse to limit the current to safe values. 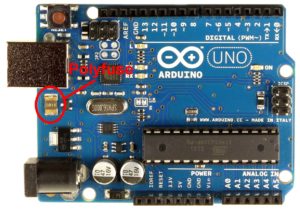